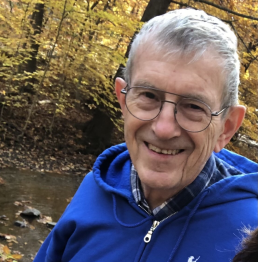 Bob has been a resident of Hagerstown since 2015. Although Bob was most proud of his family, he garnered many career accomplishments through his 40 years of employment at companies such as General Dynamics and Burroughs, and then with the high-tech powerhouse Intel in Silicon Valley. It was when he became the 11th employee of Protocol Systems in Beaverton, OR, in 1987-2006 where he went on to make his most prestigious professional contribution. He was the mechanical designer of record on the patent for the original Propaq® LT Monitor, a portable, 8-pound, battery operated vital signs instrument first used heavily in the Gulf War. The monitor is still sold by Welch Allyn today who purchased Protocol Systems in 2000.

Bob was an avid artist and his muses were the west coast waters of Oregon, Washington, and British Columbia as well as the rugged New Mexico terrain. However, it was his portraits that provided him the most national acclaim including an Artistic License from the International Academy of Watercolor Arts. He enjoyed long distance bike rides on his Tour East, recumbent and Klein, road bike. He never met a Renaissance, Baroque, or Neo-Classical Exhibition he didn’t want to attend including his equally favorite Early American Artists’ exhibitions. Relaxing, he like a good Belgian pilsner or a smooth Oregon Pinot. He could be counted on for fixing just about anything. He was generous with his friends and family – if you needed someone to pick you up anytime/anywhere Bob was your man. Sometimes he was “a man of few words”, but he could be counted on to keep promises.

Bob Lewis is survived by his wife of 57 years, Elizabeth Ann Lewis and daughters Laura Lewis and Cathleen Lewis of Philadelphia, PA. He is preceded in death by his mother and father, Dewitt and Mary Lewis, brother Dewitt Lewis and sister Barbara Lewis McCutcheon. He is survived by his sisters Carolyn Lewis Schultz and Mary Ellen Vangoff.

A celebration of his life will be held on June 18, 2022 at his wife’s home in Hagerstown. Those wishing to honor his memory may donate to Heifer International a charity whose mission is to eradicate poverty and hunger.