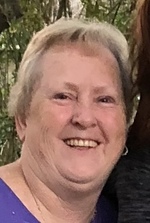 Mildred “Millie” Ann Creager, 69, of Boonsboro, passed away on January 21, 2021 surrounded by her family under the care of Hospice of Washington County. She was born on November 15, 1951 to the late Isaac Sigler, Sr. and Edna (Hamilton) Sigler. In addition to her parents, she is preceded in death by her first husband, Robert Perry (8/10/1949-1/7/1988), and her brothers Isaac Sigler, Jr, and Richard Sigler.
Millie graduated from Brunswick High School, Brunswick, MD and worked for Eastalco Aluminum Co, Buckeystown, MD, from 1974 to 2000, where she was an Environmental Secretary.
Millie is survived by her husband of almost 21 years, John M. Creager, Sr., whom she met at Eastalco Aluminum Co.; her daughters Sheryl Stepp, and her husband, Chad, of Hagerstown, MD, Gwendolen (Wendy) Neal of Ft. Lauderdale, FL; her son, John Creager, II, and his wife, Jennifer, of Hagerstown, MD; granddaughters Sianna Aaronson, and her husband, Nick, Arika Neal, and her fiancé, Brad Goff, and granddaughter Julia Creager, grandson Andrew Creager, and his wife, Samantha; great granddaughters Aliyah and Haylee Goff; her brothers Benny and Charles Sigler; and her sisters Doris Garner and Gloria Fogle. She is also survived by several sister-in-laws, as well as nieces and nephews.
Millie loved her grandchildren and great-granddaughters. Aliyah and Haylee held a special place in her heart and they truly were the apple of her eye. She spent every available moment possible with them and took pride in spoiling them rotten.